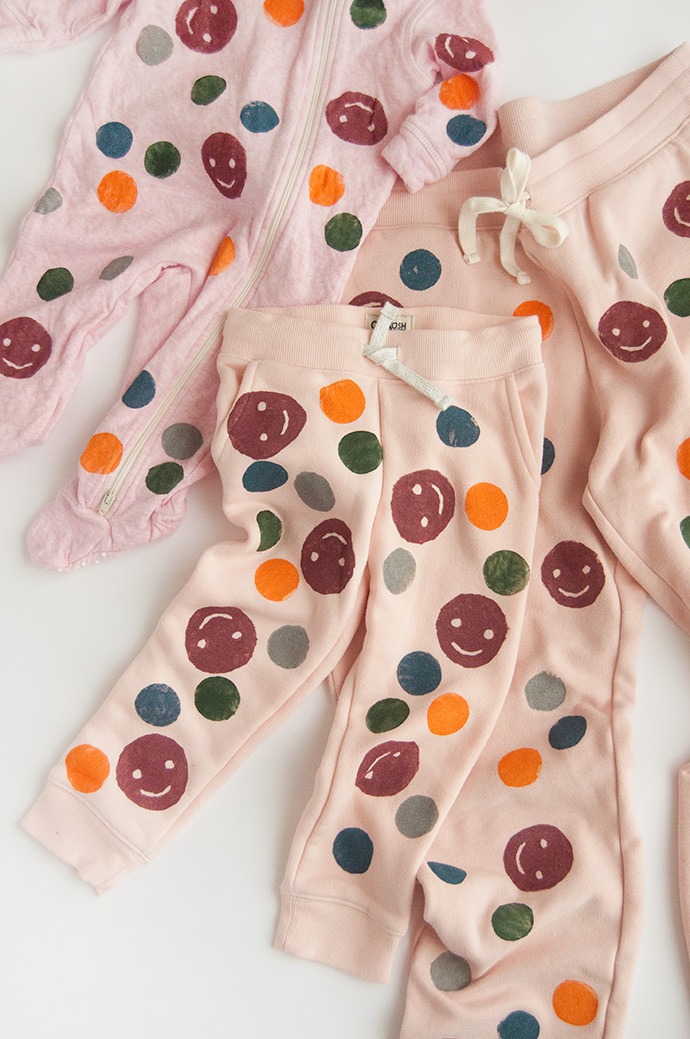 Have you noticed that matching family pajamas are everywhere these days? We think it’s such a fun idea and a great way to make staying home in your jammies extra special. Specialty pjs can be pricey though, and sometimes it’s next to impossible to get all the sizes that you need. Why not make your own instead? We teamed up with Tulip to make these quick and easy potato-stamped pj pants for the whole family! 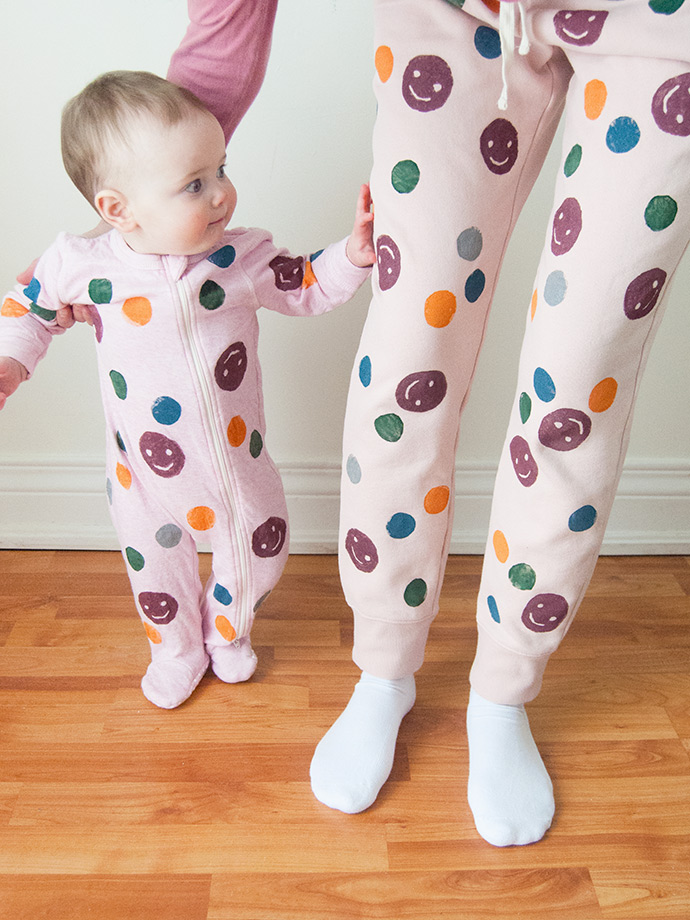 The great thing about potato stamps is that you can create literally any design you can dream up! We decided to go with simple smiley faces surrounded by confetti polka dots. Tulip Soft Fabric Paint is perfect for the job – it dries soft and flexible so that your pajamas are as comfy as ever. Keep reading for all our tips and tricks, and watch the how-to video below! 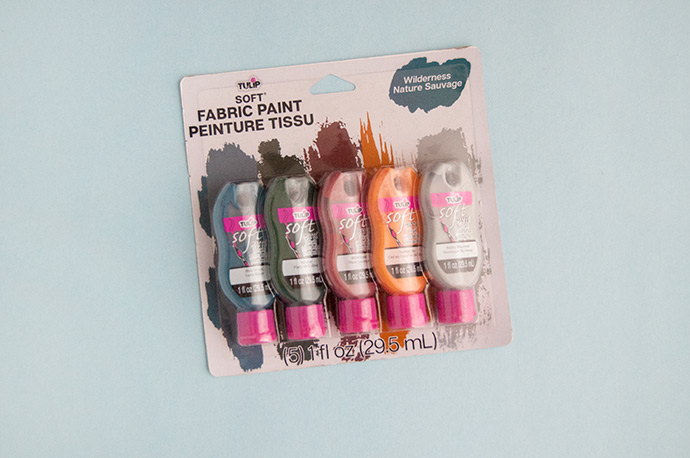 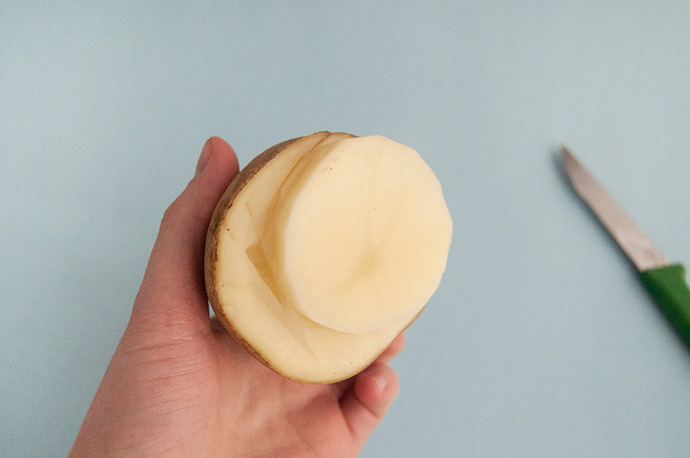 Step 1
Use a kitchen knife to cut a large potato in half. On one half, carefully carve out a circle shape and cut back the extra potato so that it sits back from the stamping surface about ½ to ¾ inch. When carving the circle, we just eyeballed it since we didn’t want an exact perfect circle, but you can definitely trace the bottom of a drinking glass onto the potato first using a pen or a toothpick to score around it. 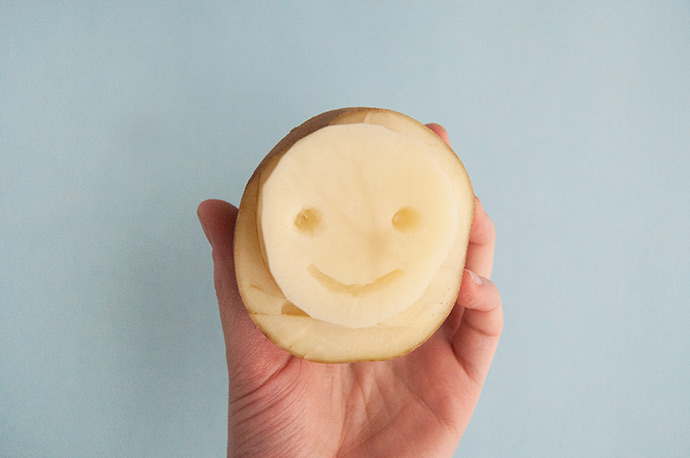 Step 2
Use the kitchen knife to carefully carve out a simple smiley face. We used a serrated knife and making the eyes nice and round was actually really easy – just poke the tip of the knife into the potato and gently rotate it. A nice even circle should form! For the mouth, just work slowly and draw a curved line, using the knife to cut a narrow channel along it. Make sure to cut both the eyes and mouth deep enough so that you have a negative space that won’t stamp onto the fabric. 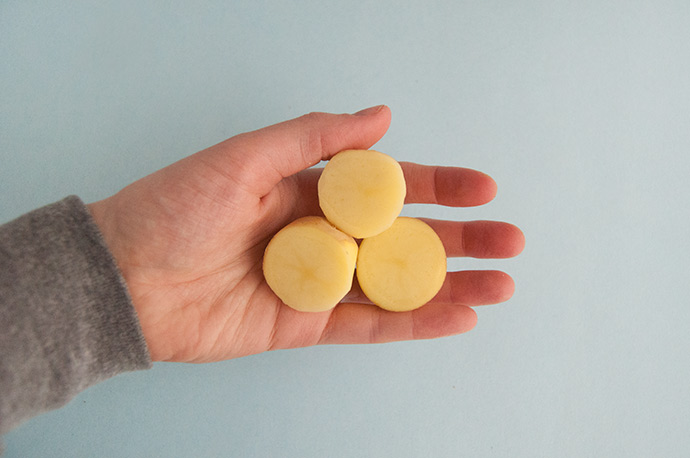 Step 3
For the confetti dots, we just used mini potatoes! Some were the perfect round shape already, but on others we just evened them out a little bit with the kitchen knife to make them more circular than their natural oval shape. 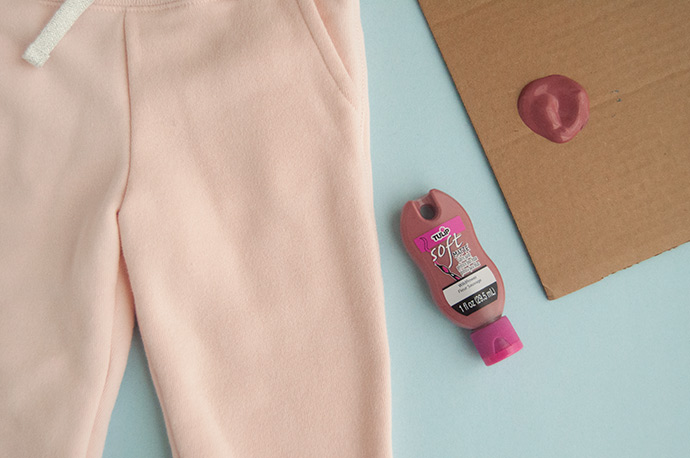 Step 4
Prep your materials and workspace. Make sure your pants have been washed and dried before you stamp on them, and then lay them on your work surface. If the material is thin, you will definitely want to line the pants with pieces of cardboard to prevent any paint from bleeding through. Apply a blob of paint onto a piece of scrap cardboard. 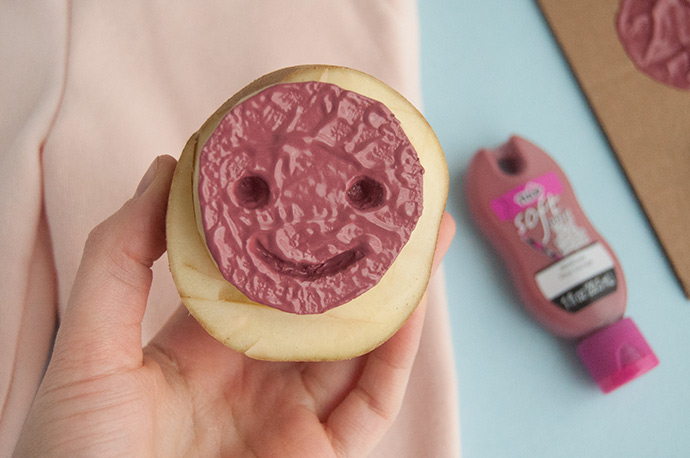 Step 5
Dip your stamp into the blob and wiggle it around a bit until the entire surface of the stamp is covered. You’ll probably have a lot of paint on the stamp, so gently dab some off on the scrap cardboard. Use a paintbrush to remove any excess paint that’s built up in the eyes or mouth, and to even out the paint on the stamp. Before stamping onto the real thing, it’s a good idea to practise on a scrap of fabric or cardboard first to see if you have enough or too much paint on the stamp. 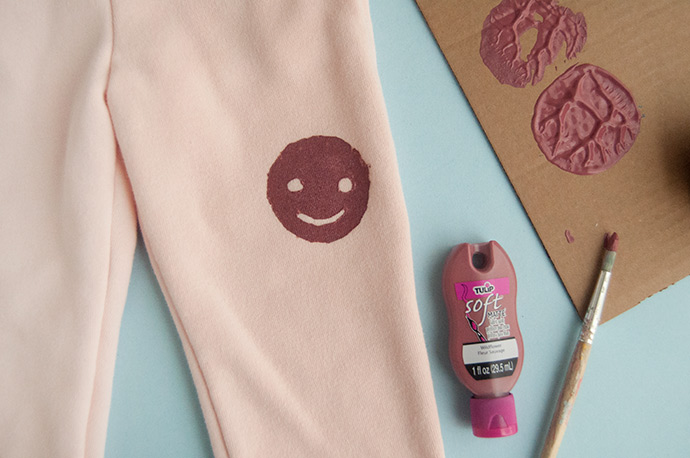 Step 6
Once you’re happy with your technique, load up the stamp with paint and press the potato onto the pants with even pressure. Remove the stamp and you’ll have a cheerful smiley face! Repeat this process all over the pants. 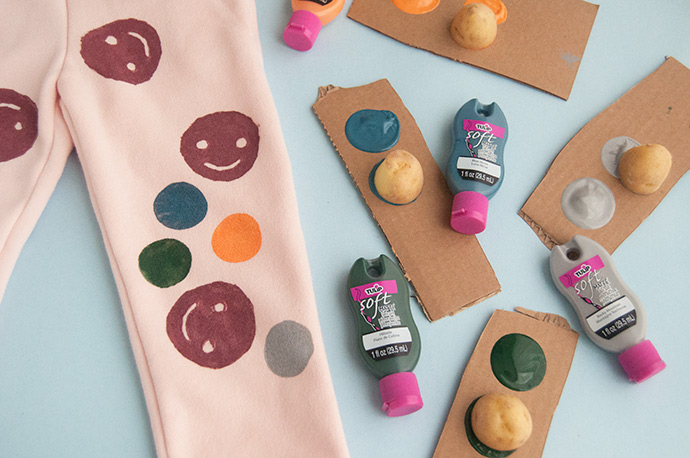 Step 7
Fill in some of the spaces with the smaller confetti stamps using the same technique with other colors of Tulip’s Soft Fabric Paint. You’ll likely find that not every single impression is perfect – that’s totally okay! We love the slight imperfections when potato stamping, but you can always make touch ups with paint and a brush as needed. 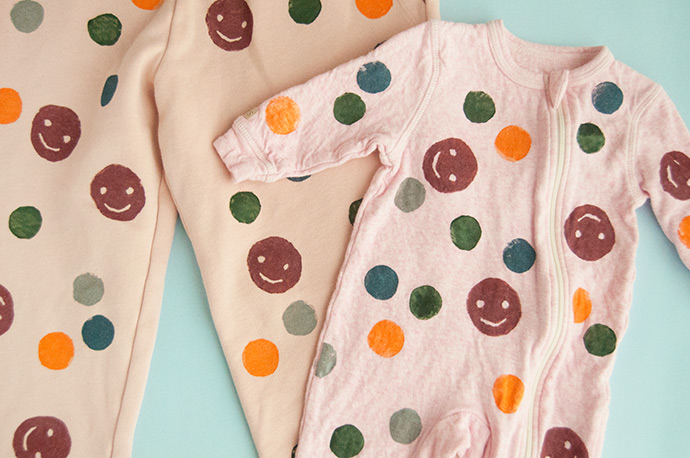 Step 8
Do this on as many pairs of pajama pants as you like! Lay flat to dry for 4 hours. 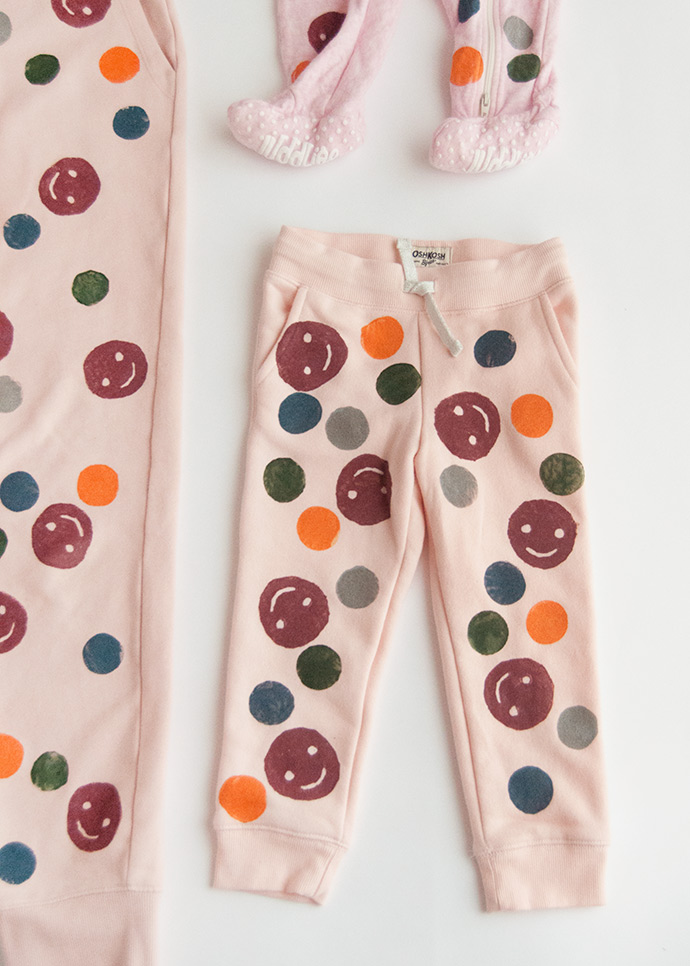 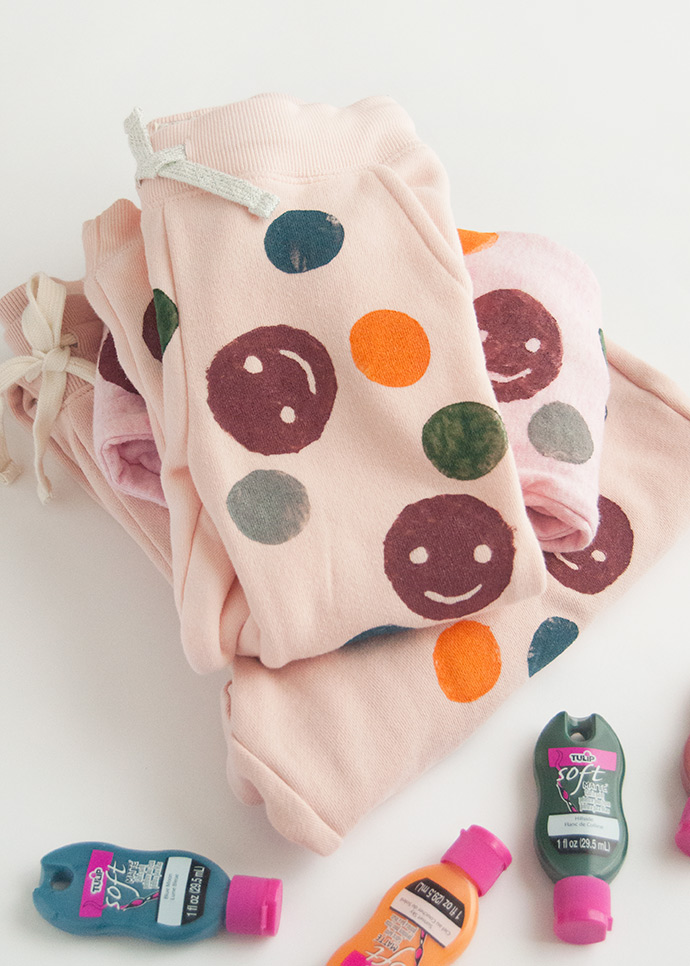 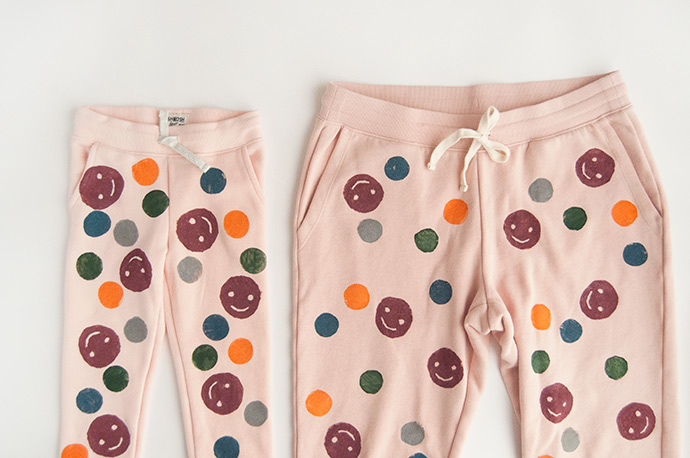 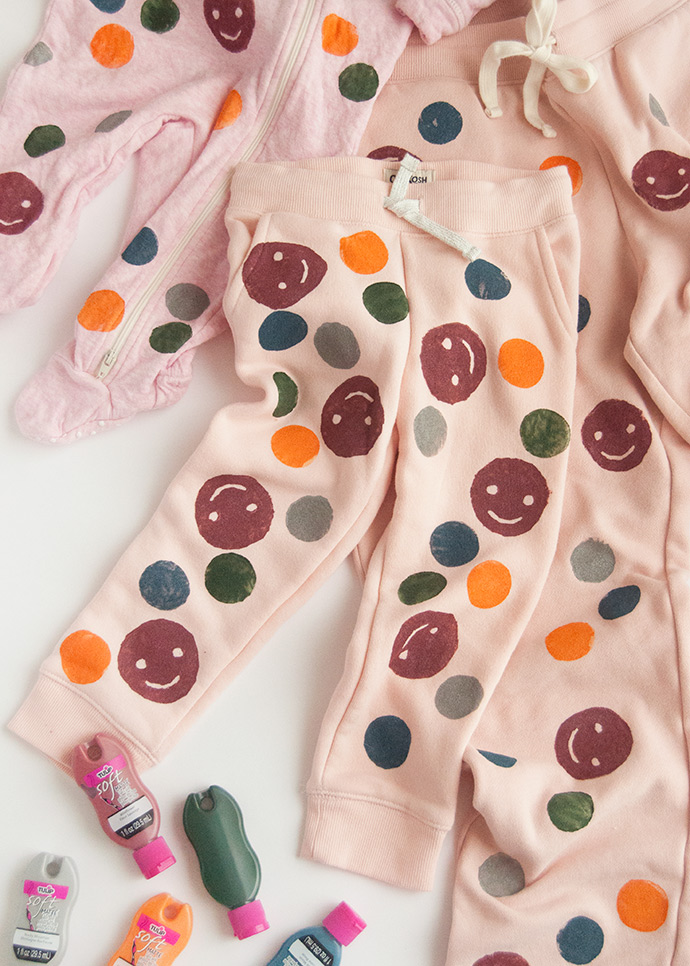 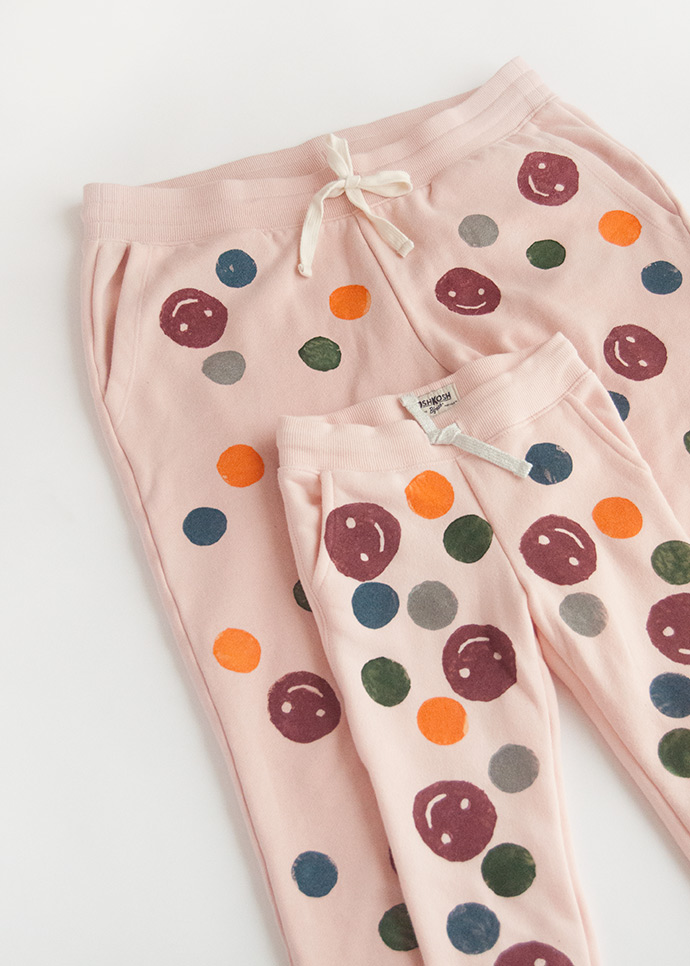 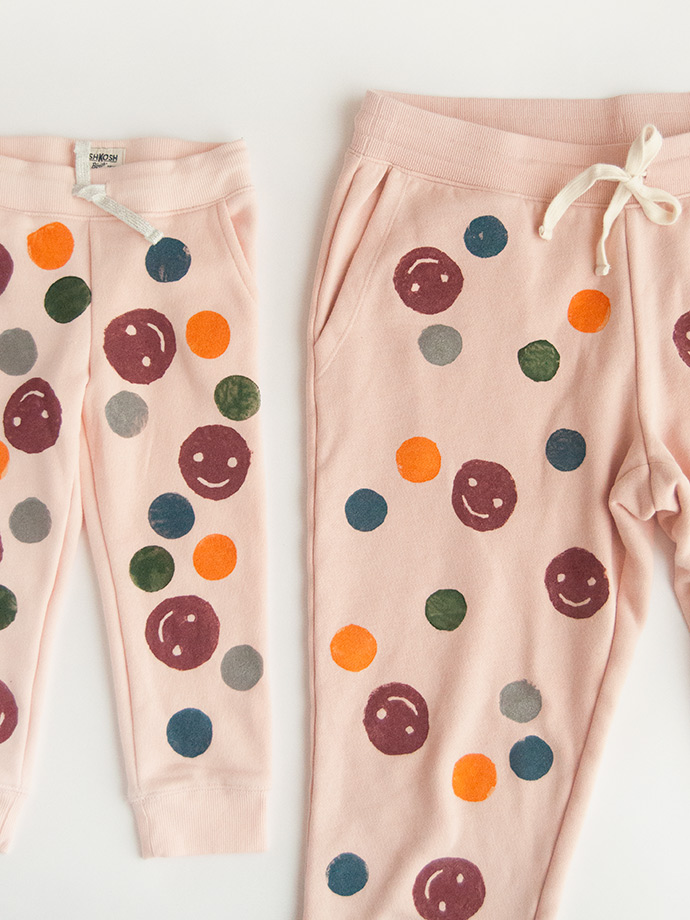